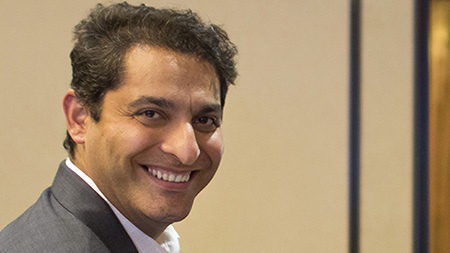 Working Together For Patients

Babak and his medical team work across all therapeutic areas within Bristol Myers Squibb, including: oncology, immuno-science, cardiovascular and genetically defined diseases.

“My father always wanted me to become a doctor,” says Babak. “He’d say there is a lot you can do as a doctor to help people.”

Babak realized early in his medical career that private practice was not for him. He is inspired by challenges and driven to find ways to serve patient populations with significant unmet needs. In Ethiopia, this team of social workers and health educators helped patients understand the treatments they were receiving for tuberculosis and other rare ailments.

While treating patients in remote areas, Babak worked from makeshift offices. In Ethiopia, he had to enter patient files every day into a computer operated by a solar panel in order to capture important epidemiological information.

In Ethiopia, some patients were in such serious condition they could not walk the distance to the transitional clinic. Instead, they set up camp outside, and Babak would visit them there. The height of their tents only came up to his chest, so he bent over to enter, and examined patients in a sitting position.

Babak and his wife, Sona, a laboratory technician, functioned as a mobile medical team, moving every six months to a year to treat patients in remote areas of the world. In Tbilisi, Georgia, they enjoyed long-awaited packages of pistachios their parents sent from Iran.

Wherever their medical missions took them, Babak and his wife, Sona, who are both from Iran, made sure to celebrate the Persian New Year with traditional sweets and “share their happiness with their local team.”

While in Ethiopia, Babak’s wife, Sona, learned how to roast fresh, green coffee beans, smash them, put them in a wooden jar, and heat them over charcoal to drink. “It is a very special ceremony,” says Babak.

Babak’s parents are retired, and live in Iran. His father was a food specialist with a talent for listening to people, and his mother was a manager at a large company during a time when women had to fight for their right to work. “I’d like to think I am a combination of the best of both of them,” says Babak.

Babak continues to advocate for medical aid missions in his personal time—speaking to medical students and encouraging them to seek out and care for patients in remote areas. “I try to inspire them to experience life in different environments,” he says.

Babak, and his wife, Sona, make sure their daughter, Rose, understands life is not always like what she experiences in Canada. “We want her [to] grow up with a purpose, to try to contribute to society as much as she can, whatever career she chooses.”

Medicine with Impact:
Babak Works to Provide Access for “Cultures of Need”

Babak immerses himself in his work.

As a physician serving patients around the world, he learned more than just how to live and work in remote areas. On the road in Afghanistan, getting to a region 50 kilometers away could take up to three hours due to poor road infrastructure and security stops. As a dinner guest at the homes of people in Tbilisi, Georgia, you sample each of five or six different types of food to demonstrate your politeness. “You definitely gain weight when you are in that country,” says Babak.

His time in Ethiopia was particularly memorable. While caring for nomadic populations, he and his small team of doctors, nurses and lab technicians lived in tukuls (tent-like structures) in the middle of the desert, where they eagerly anticipated their weekly shipment of food from the faraway capital.

“We didn’t have electricity,” recalls Babak. “We had solar panels for the transitional clinic, where we treated 450 patients and took care of 60 people in beds.” Friday food deliveries came in one cool box with enough meat for two to three days, and potatoes, rice, cabbage, pasta and other dry goods to get them through the rest of the week.

“The most challenging thing was, because we didn’t have refrigeration, they sent each person two yogurts,” says Babak. “Everyone would take their two yogurts, sit in a corner and finish them before coming back to talk. That has stuck with me. You know how simple life can be when you can be happy for five minutes with two yogurts.”

“
I always know that what I’m doing day-to-day is in the service of patients. I feel it.
”

Now, his colleagues in Bristol Myers Squibb’s Medical Affairs department call him whenever they have meetings with food. “They know I’ll always sit and eat with people, especially when it’s free!” he says, laughing.

“Treating medically-underserved populations taught me a lot about working with people from different cultures,” says Babak. “I learned how to be more patient-focused, and always put that at the center of my actions. I discovered I could continue this into practice in the pharmaceutical industry. That is what is inspiring. Bristol Myers Squibb provides me with the environment to help make a greater impact.”

Babak was born, raised and went to medical school in Tehran, Iran. After he graduated, the government sent him to a remote area of Iran for a year and a half to do mandatory practice work.

It didn’t take him long to make an impact in his patients’ lives. “I was the only doctor available for a large province,” explains Babak. “And we were facing an epidemic of a disease spread by sandflies. This disease forms a large ulcer, which can spread to your liver and other areas of your body. It could be deadly in certain cases. There was no effective treatment available in the region.”

Having just graduated, Babak was a young physician, and didn’t yet have experience leading clinical trials. And yet he decided to try and lead two clinical trials in the region—and he did it. Ultimately, the trials included 600 patients. He published the data, presented it to an international congress, and his drive to focus on patients with significant unmet medical needs was born.

A Far-Reaching, Global Career with a Constant Focus

In the next chapter of his career, Babak continued working with infectious diseases with an international organization that sent him on medical missions around the world. When he and his wife moved to Canada, he decided to earn a master’s in business administration in Montreal on 2013. He then embarked on the next chapter of his career, on the other side of the pharmaceutical equation.

“I worked very closely with my patients in the field,” says Babak. “My goal when I first transitioned to the pharmaceutical industry was to do a lot of research and conduct studies to help patients who need medicine not currently available to them.” He started with another company, but did not feel that what he was doing aligned closely enough with his mission. Then he joined Bristol Myers Squibb because he thought he could make more of an impact, and “really address unmet medical needs."

Babak’s role includes making sure Bristol Myers Squibb understands the unmet medical needs of his region as the company manages clinical trials, post-marketing studies and other clinical activities. His team strives to conduct patient-focused, patient-centric clinical trials. “I really put myself in the shoes of the patients and families," says Babak. "Focusing on the needs of individuals inspires me and my team to keep working harder."

Babak’s elderly parents, who remain in Iran, were early sources of inspiration for his drive to serve people in need. “My father is a very quiet person,” he says. “Often he would come home late from his job as a food specialist because he was listening to someone in his office talking about their problems. He has a big family—four brothers, three sisters and a lot of nephews and nieces—and he was the one they confided in about marriage, work or career issues.”

“We have a saying in Farsi,” explains Babak. “It is ‘sang sabour.’ It means he is everybody’s ‘stone of patience.’ People who have issues or problems talk to him. He is their crying shoulder.”

“My father always wanted me to become a doctor,” he adds. “He’d say there is a lot you can do as a doctor to help people. I try to extrapolate what he did with his community and expand my reach internationally.”

Babak calls his mother, a retired journalist, a “very hard worker.” After the revolution in Iran, she fought for her right to continue working, being a female professional. Ultimately, she became a manager at a large company, where she could inspire many other women to pursue meaningful careers.

“I’d like to think I am a combination of the best of both of them,” says Babak, “being kind and trying to help people, and always striving to be a hard worker, focused on what I want to do and where I want to go.”

A Different Kind of Research

In his spare time, Babak reads a lot of history books: ancient histories; histories of France, the United Kingdom and Canada. “It has just become part of my DNA,” he says. “Before I go to any country or city, I want to know where the people came from and what challenges they’ve been through so I can integrate quickly.”

Babak plans to pass this appreciation of different cultures on to his four-year-old daughter, Rose. “I have a lot of stories to tell Rose about our trips,” says Babak. “I want her to think about others who lack access to things we take for granted: food, medicine, resources.”

While Babak and his wife, Sona—a lab technician who shares his love of medical mission work—moved to Canada to create a more stable home environment, they plan to return to the field together someday.

For now, he knows he’s helping to make a difference. “At Bristol Myers Squibb I always know that what I’m doing day-to-day is in the service of patients. I feel it. It’s a good place to be.”