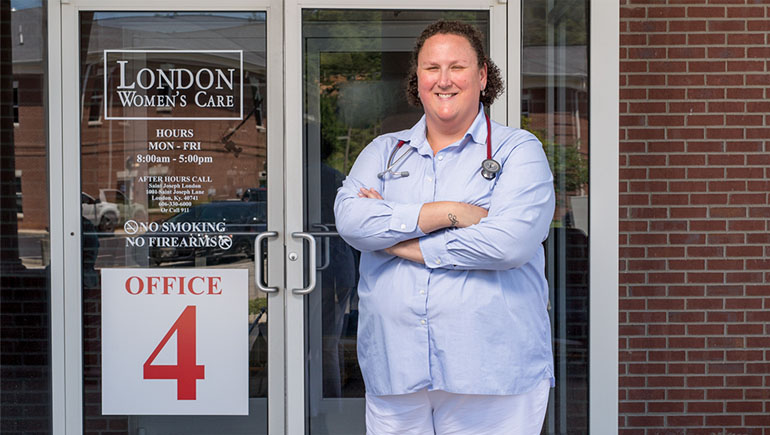 About Us / Responsibility / The Bristol Myers Squibb Foundation / Our success stories

Melissa Zook, M.D., loves to listen to her patients’ stories. At the small clinic in rural Kentucky where she works as a family practice doctor, she spends much of her day asking people about their lives. Not just their symptoms, their lives. “Tell me your story,” Melissa says.

It’s not just idle curiosity. Melissa uses what she calls the “healing power of storytelling” to guide her patient care. Telling stories helps her patients open up to her, she says. Their stories help her understand not only what diagnostic tests are needed, but if a patient will be able to follow through on health care suggestions, and challenges in their home environment like whether or not a relative might steal pain medications. It also helps Melissa understand how hard it can be for a patient to follow through on recommended cancer screenings.

Kentucky LEADS is a statewide comprehensive cancer control coalition including the University of Louisville, the University of Kentucky, the Lung Cancer Alliance and more than 55 other organizations committed to reducing the state’s lung cancer burden. A major component of the program is educating primary care providers around the state on low-dose chest CT scans (LDCT) to detect early stage lung cancer, how to make decisions with patients about screening, and the many resources available to help patients quit smoking.

Educating high-risk patients on the benefits of getting an LDCT is a high priority for Melissa. One out of four cancer deaths in Kentucky is from lung cancer, making it the leading cause of cancer death among both men and women. In the United States more than 150,000 people die each year from lung cancer, with states in the southeast – like Kentucky – having among the highest rates and poorest outcomes. Research has shown that LDCT screening significantly reduces lung cancer mortality.

“We’re working to change how doctors approach lung cancer screening. There is a misperception among some physicians that a chest x-ray is good enough,” says Melissa. “I have certainly changed the way I think about screening after the training I received through Kentucky LEADS. I’m much more aggressive about encouraging people to consider getting screened.”

“The biggest frustration is catching it too late. I try to get the message to my patients that outcomes are significantly better if lung cancer is caught early.”