Growing up with beta-thalassemia: Taking charge of your care

Josephine Bila, LMSW, shares what she learned during her transition to adult care for her beta-thalassemia.

Ask people about their earliest memories and most will recall summer vacations or family parties. But for Josephine Bila, many of her earliest memories include holding her mother Joycelyn’s hand during a blood transfusion. These treatments have been a regular and frequent part of her life since birth, because she has beta-thalassemia, a rare genetic disorder that reduces her body’s ability to produce enough healthy red blood cells, leading to low blood counts.

Josephine is now 42 and doesn’t have her mother with her during transfusions anymore. She’s responsible for her own care and independently deals with the impact of her rare disease. But the transition from relying on her parents to owning her care wasn’t very smooth. That’s why for this year’s International Thalassemia Day, Josephine offers some advice to young adults who will also one day be responsible for their own beta-thalassemia care.

Talk to Others About Your Disease

When Josephine was growing up in Long Island, NY, she felt lonely and alienated in elementary school because of her rare disease. Her small body required weekly blood transfusions, which forced her to be absent from school more often than others. She felt that her classmates viewed her as “different” and that she had to hide her condition to make friends.

Her teachers didn’t know much about her rare disease. At the time, there were few resources available for anyone to learn about beta-thalassemia.

“Teachers were afraid I would get hurt on the playground,” Josephine said. “They would keep me in the classroom during recess, which made me feel like a social outcast.” When she came home, she cried to her parents about the experience.

Fortunately for her, high school brought a fresh start. Josephine made new friends who were supportive and this made her feel more comfortable speaking about her condition.

As she learned more about her illness, she was able to explain it better to her friends. For her, talking to others about what she was going through with her rare disease, instead of trying to hide it, helped her feel better. This reduced some of the emotional and social stress in her life.

Most teenagers want more freedom, independence and control in their lives. For Josephine, part of that independence meant preparing her chelation medicine and taking herself to her blood transfusion appointments after she passed her driver’s test.

But there were moments when she struggled as she learned to take control of her care. For instance, in her 20’s, she switched from a pediatric to an adult hematologist. After the switch, the hospital’s blood bank staff informed her new doctor that they were going to stop washing her donor’s cells, a process that removes most of the plasma proteins from a donor’s red blood cells to reduce potential allergic reactions.

Josephine knew that she’d had transfusion reactions in the past, which is why they initially began washing the blood that she received. While Josephine was concerned, she said nothing. She assumed that the blood bank staff and her doctor knew better than she did. Who was she to question them?

“If I didn’t finally speak up and say something, maybe I wouldn’t be here right now.” Looking back, she wished she had coordinated more communication between the new and old doctors. “My patient file was so thick; I don’t know how much of it my new doctor read or understood.”

Soon after that, she decided to move to New York City, partly for her career and partly because there were more specialists familiar with treating beta-thalassemia there.

“
Be your own best advocate because no one else will.
” 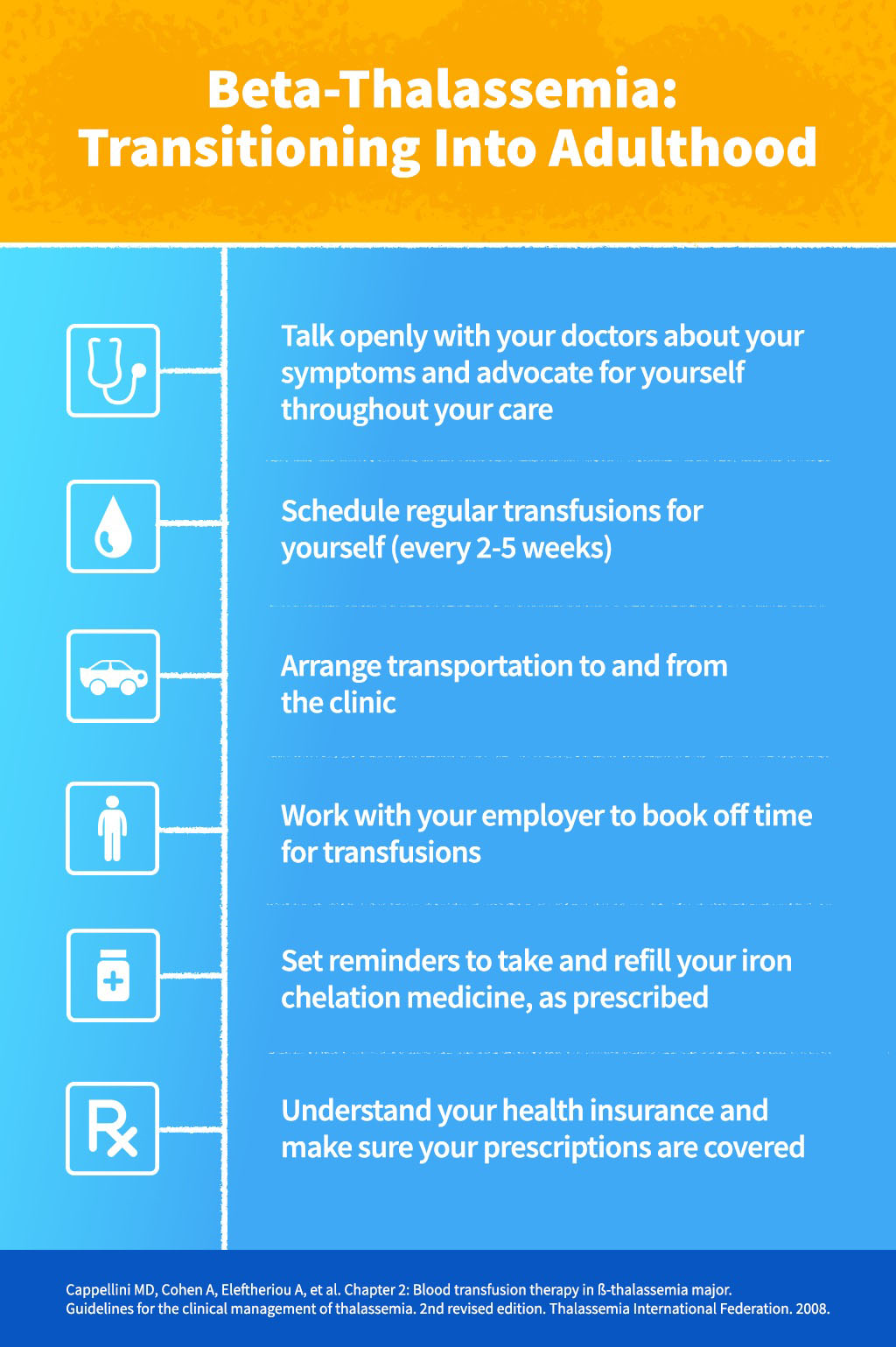 During her transition from childhood to adulthood, Josephine learned the importance of not only sharing her experience with her friends and family, but also advocating for people living with beta-thalassemia. Specifically, patients who are desperate for more information and potential new treatment options.

Josephine has become one of the beta-thalassemia community’s fiercest advocates. She publishes a blog called “Thalassemia Diet,” where she shares information for people living with the disease, and a YouTube channel that features interviews with patients, doctors and researchers. She shares information about her disease on Facebook and Instagram, has spoken at the annual Thalassemia International Federation World Congress and is on the board of directors for the Cooley’s Anemia Foundation. She has also authored a book, titled “Transfusion: A Patient Survival Guide,” so other patients with beta-thalassemia can learn from her experiences.

Her efforts are focused on improving the availability of information about beta-thalassemia and raising awareness of the disease. Because if teachers and classmates have more information, maybe boys and girls won’t feel so alone like she did when she was younger. Because if there is more open communication between patients and their doctors, maybe they could provide better care. Because greater awareness in the research community may lead to therapies and potentially fewer missed days at school, work or with family.

Today, Josephine still has her mother and father by her side – not during transfusions, but on the advocacy front. Four years ago, her parents, Joycelyn and Nick, along with her sister Gloria, began the annual Team Buffalo Care Walk in Buffalo, NY in honor of Josephine. They wanted to raise awareness in the community about the impact beta-thalassemia has on those living with the disease and their families.

Josephine tells younger patients, “Be your own best advocate because no one else will. Beta-thalassemia is a serious condition, which is why it’s important to have a supportive care team to address your symptoms and maintain your health.”