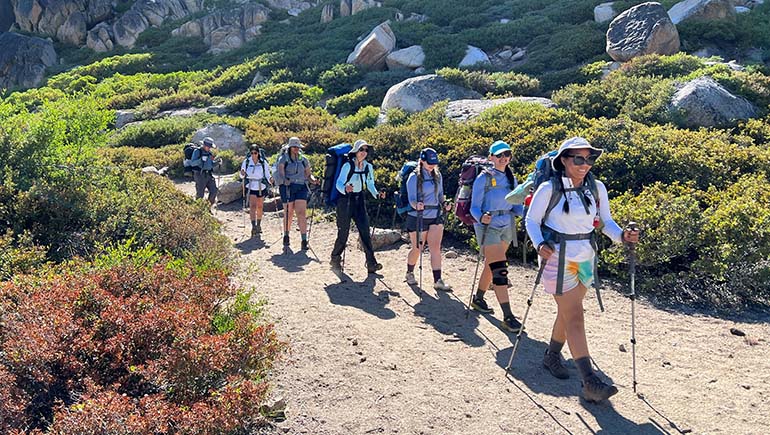 Scientific and hiking adventures to inspire the next generation of researchers

When Tamica D’Souza applied for a research and development internship at Bristol Myers Squibb, she had no idea that a few months later she would be loading up a 30-pound backpack in preparation for a once-in-a-lifetime opportunity to take a multi-day hiking trip through the wilderness of the Sierra Nevada Mountains in California. A culmination of her summer internship, the five-day camping trip, led by Kristen Hege, MD, senior vice president of Early Clinical Development, Oncology/Hematology and Cell Therapy at Bristol Myers Squibb and an experienced wilderness enthusiast, pushed the interns in ways they had not experienced before. This included a 3-hour lakeside discussion on authentic leadership and the value of failure moderated by Hege’s trip co-leader, Kathleen Abadie, a current PhD graduate student and Fulbright scholar at Univ. Washington and Hege’s first college summer intern a decade ago.

“
It made us grow really close to one another. We had some really good talks about being women in STEM and embracing that feeling of 'you can do anything.' And I think that was the big takeaway of that trip is that you can do anything if you put your mind to it.
Tamica D’Souza
”

For the interns on the trip – all women of color – the excursion offered an opportunity to go beyond the traditional skills and professional development taking place in the labs of Bristol Myers Squibb, and have an experience focused on personal growth, leadership skills, collaboration and fostering a sense of camaraderie.

“
Backpacking affords long days of screenless time walking the trail together, climbing mountain passes, setting up lakeside camps and encouraging each other when the going gets tough, all while leaving plenty of time for unfettered discussions of science, medicine, diversity, careers and leadership. I am a firm believer in the mental health benefits of 'wilderness therapy.'
Kristen Hege, MD, senior vice president of Early Clinical Development, Oncology/Hematology and Cell Therapy
”

According to the Pew Research Center, STEM education has increased by 13% in job growth compared to a 9% job growth increase for other professions, showcasing the increasing importance STEM education has on today's society. Despite this increase, women and people of color are underrepresented in STEM careers, signaling a critical need for expanded access to STEM education programming.

From backpacking through the California mountains with a renowned physician-scientist to developing a hypothesis, collecting, analyzing and presenting data, the R&D internship program prioritizes recruiting interns from diverse backgrounds in the Bay Area and empowering them with skills and knowledge so they can play an integral role in transform patients’ lives through science, wherever their career path may lead.

Noelia Barajas-Mendoza, a Mexico native and student at the University of California, Los Angeles (UCLA), is now in her second stint with the summer internship program at the Redwood City campus.

Barajas-Mendoza grew up in Mexico for 10 years, and even from a young age had a passion for math and envisioned a future in forensic science.  Working her way through part-time jobs at retail stores, restaurants and supermarkets, she kept her mind set on a career in STEM. It was not until her mother passed away from an illness, which only later was identified as cancer, that she knew she wanted to do more to understand cancer and contribute to possible future treatment options.

“
I wanted to learn about it because in my family, a lot of relatives have had cancer and some of them have died from it. It's interesting that now I'm able to contribute to treating patients with cancer. And although I know it takes a lot of years to develop a drug, I know that even a small piece of data is important to keep the project going.
Noelia Barajas-Mendoza
”

For D’Souza, the road to wanting a career in STEM started at home. With both parents having professions in the healthcare industry, she had medicine in the forefront of her mind. "I always think of science as an investigation, and I was always into Nancy Drew mysteries and crime books growing up. I think that fascination with finding out the unknown is what made me gravitate to science."

She started studying microbiology at California Polytechnic State University and soon realized that scientific research could help people just as much as working in a hospital.

But finding an internship was a labor of love for D’Souza, especially during the pandemic. "I had a whole spreadsheet of every place I applied to. I think it wound up being over 100 different internships. I already had another offer when I found out I got accepted to this one, but I was really excited about the opportunity to work at BMS so I could conduct meaningful research that may one make a difference in people’s lives."

Diving into the science

Barajas-Mendoza had taken some lab classes prior to coming to Bristol Myers Squibb, but because of COVID, they were exclusively online, and they were more simulation-based rather than a true lab experience. "When I came [to BMS], I didn't even know how to hold a pipette."

Last summer, she had two projects with a supervisor and mentor for each. "My supervisors taught me the biology and the immunology behind the experiments that I was doing and how to analyze the data and use the supports,” Barajas-Mendoza said. “My mentors were more hands-on since they were working in the lab next to me. At the beginning, I would shadow them first to see how they did the experiment. Then I would do the experiment while they were watching me. And then by the third time, I was doing the experiment on my own."

D’Souza said she appreciated having that independence to get more comfortable and familiar with all of the new tools and programs she was working with.

“I think my biggest takeaway was that I realized it was OK to not know everything,” D’Souza said. “It was more about continuing to learn and grow throughout the internship and that’s what I’m still doing. I think I learn something every single day. I may never know 100% exactly what I'm doing, but it slowly clicks more and more every single day. I feel like I know much more now than I did a year ago.”

As the interns look ahead, D’Souza is exploring schools to apply for a PhD program and hopes to continue with Bristol Myers Squibb in some fashion. "I've been talking to other people in different departments, because I would love to see what other roles exist within a company like BMS and learn more about the whole drug discovery workflow process."

For Barajas-Mendoza, she will complete her studies at UCLA, and then look to take a couple of gap years before applying to medical school. She said she hopes to continue contributing to the company during that time while continuing to maximize all her learning opportunities in STEM.

"Our investment in STEM goes beyond the lab and works to capture the scientific curiosity of the next generation," said Chetna Rao, director, head of Global R&ED STEM Strategy and architect of the internship program. "We want our interns to be prepared to succeed in the working world, whether that is with BMS or wherever their career journey takes them. That is why we developed a robust curriculum that engages interns not only in scientific experiments and lab work, but also life-skills like financial literacy, communication in a professional environment, goal setting and more.”