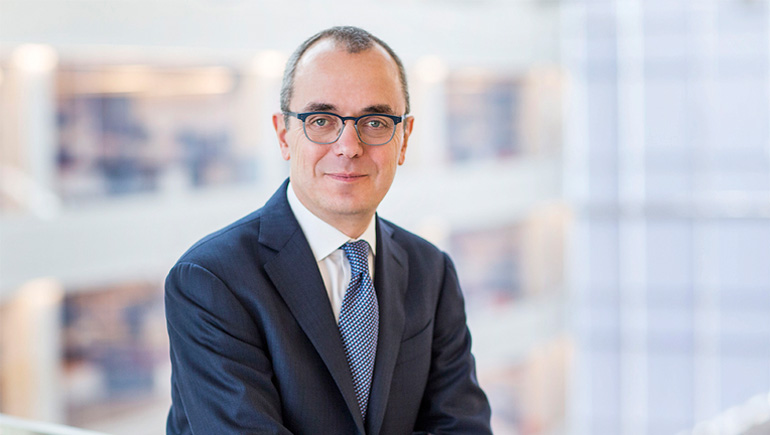 The race against cancer is one we win together

Editor’s note: Our Chairman and CEO Giovanni Caforio reflects on the importance of collaboration across the healthcare ecosystem to better serve patients.  This week in New York City, Caforio will discuss the impact scientific innovation has had on cancer treatment and  survivorship as part of The Atlantic Live’s discussion series, “The People vs. Cancer.” Bristol Myers Squibb is an underwriter of the event.

e are living in a golden era of cancer research that was unimaginable a decade ago. In the past five years alone, scientific innovation has accelerated at an unprecedented speed and cancer diagnoses that were once terminal are increasingly becoming stories of patients beating cancer.  Behind this progress are stories of the scientific community coming together in new ways, bringing research and insights forward faster and better than we’ve ever seen.

For me personally, it has been equally exciting and humbling to serve as CEO of a company that developed the first cancer checkpoint inhibitor and saw the incredible impact this new class of medicines has had on the fight against cancer. We’ve seen many more cancer survivors in the last five years and I am confident we will see this number increase. We’ve made great progress, but there’s still more to be done for cancer patients hoping to make the journey from disease to survivorship.

Take the story of immunotherapy. In 2004, Bristol Myers Squibb began collaborating with Medarex on work being done on CTLA-4 protein receptor, work we saw as important and differentiated despite some of the skepticism at the time. Jim Allison, now a Nobel Prize winner, had shown that CTLA-4 played an important role in cancer: taking the “brake” off T-cells and allowing them to attack tumors.

Shortly after the initial discovery by Allison, Alan Korman and Nils Lonberg at Medarex partnered with Allison and developed a fully human anti-CTLA-4 antibody to test the approach in humans. That antibody would lead to the first approved checkpoint inhibitor. In 2009 Bristol Myers Squibb acquired  Medarex and our team of scientists, as well as the academic researchers in this area, came together to pursue what they believed to be a game changer in cancer.  There were setbacks along the way, but they knew they were on to something.  And they were right.

Fast forward to today, where two immunotherapies that came out of Medarex are now important advances in cancer care and there’s no doubt in what was done.  Critical in the life of these medicines and the development of the science was a much more open model between academia, biotech and pharma. Many points in the storyline would have been different if the scientists, the companies or the investigators had acted alone or based decisions on just their own data.

And even though this story reflects incredible progress in the treatment of cancer, we have also learned that not all cancer patients will respond well — if at all — to the therapies currently available. We also recognize that  the current R&D model has not evolved fast enough. It’s a lengthy and costly process and on average, takes 10 to 15 years to move a medicine from the lab to the market.

That’s time that cancer patients and their loved ones can’t afford to wait.

To accelerate the next wave of medical innovation, we have to take what we’ve learned and ensure we create efficiencies and accelerate the delivery of new medicines to patients.

At Bristol Myers Squibb, we’ve applied the lessons from Medarex and built an increasingly open model. We see firsthand the benefits of supporting and partnering with academia, biotech, and other healthcare partners. We place our researchers in areas where we know they’ll get the broadest view, collaborating with biotech companies, academic institutions, advocacy groups and government agencies.

Our most recent example of this is our new research center in Cambridge, Mass., which will open later this month. At this facility, we will have 300 researchers focused on a very important question in cancer care and other illneses — treatment resistance.  By working in an open innovation model, we can bring together the leading research and latest innovations with a goal to better and more quickly serve the needs of patients.

I know that there is more work to do. I also know we — the cancer community — need to do this work together.  I am optimistic that together, we will make strides to improve and innovate treatment options for patients. But we must work like it is a race against the clock. For cancer patients and their loved ones, it is.