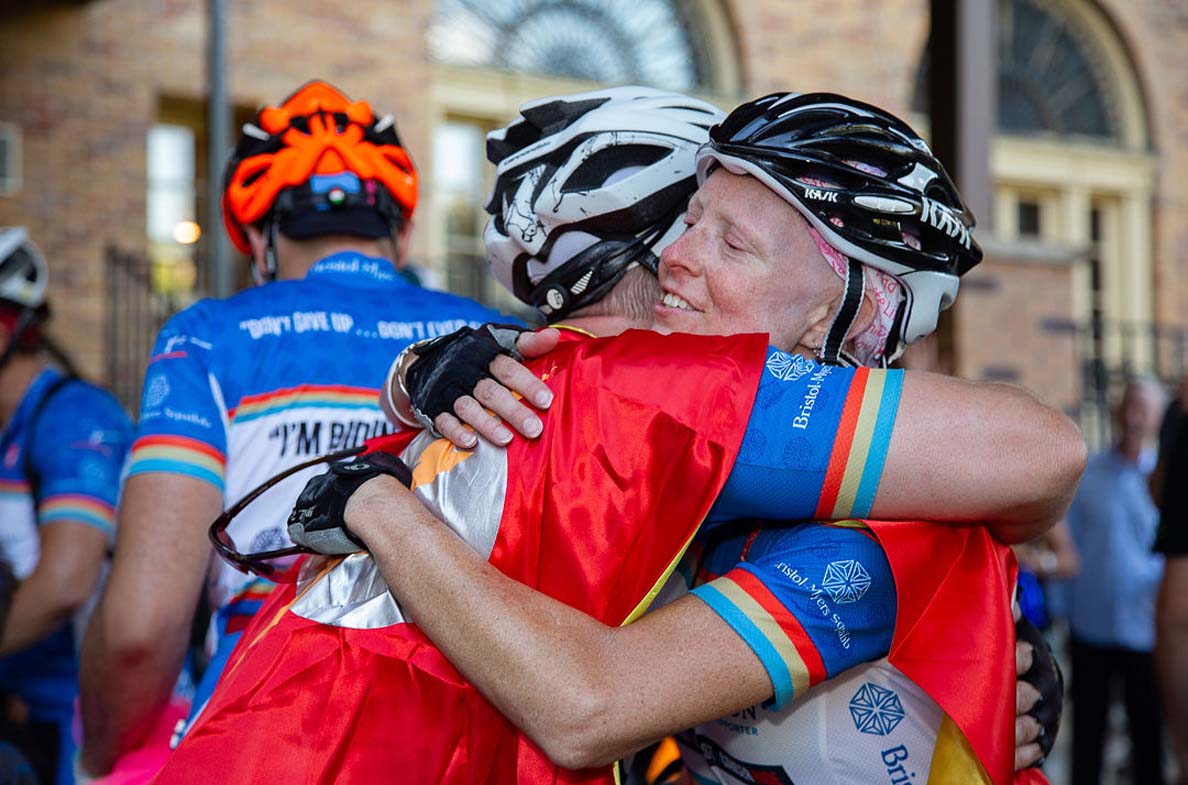 Heidi Googe celebrates with a fellow rider during the Coast 2 Coast 4 Cancer ride.

Living life to the fullest

To the amazement of her fellow riders in last September’s Coast 2 Coast 4 Cancer (C2C4C) cycling fundraiser, Heidi Googe rode more than 200 miles over three days from Denver to Kansas City as a member of the Synergy Cyclers team. Fellow rider Stu Dorman recalls how Heidi rode while undergoing chemotherapy treatment.

“No hair. Thin as a rail. But she rode every single mile of our leg,” Dorman said. “She was an inspiration beyond anything I could imagine.”

Sadly, Heidi lost her six-year battle with breast cancer on December 24, 2018. As a BMS employee for the past 13 years, Heidi was well known as a valued colleague and friend, one who will always be remembered by those with whom she worked.

But before losing her battle, Heidi was one of more than 100 BMS employees selected to participate in the fourth annual C2C4C ride, where novice cyclists commit themselves to extensive training so that they can give back to cancer patients on a ride across America. Riders participated on one of seven teams. Each relay team rode a stage over three days. Ultimately, this epic trek took C2C4C riders from Cannon Beach, Ore., to Long Branch, N.J., raising more than $1 million for The V Foundation for Cancer Research, a charitable organization dedicated to achieving victory over cancer through research. The organization was founded by Jim Valvano, legendary North Carolina State basketball coach and ESPN commentator, shortly before he succumbed to cancer in 1993.

“Heidi’s determination and capability were evident in the way she powered through the C2C4C ride, never doubting herself or even entertaining the thought that she might be too weak to complete it,” according to Rayshida Taylor, a colleague. “She was a passionate, spirited young woman who lived her life to the fullest and is an inspiration to all of us.”

Linda Hatfield, another colleague, remembered Heidi’s positive attitude and drive during her training for C2C4C in her remarks at Heidi’s memorial service on January 12 in Atlanta, Ga. A second service was held on January 19 in Varnville, S.C., where Heidi was born.

“Her weekends were devoted to long training rides, which took a lot out of Heidi physically, but yet she would re-bound and be back at work Monday in full force,” Hatfield said. “I don’t know how she did it.”

Hatfield notes that during the ride, she never heard Heidi complain or even ask for anything. “Not only did Heidi inspire me with her strength, courage and tenacity, but also all the other riders, including our coaches,” Hatfield added.

Lauren Tobin, who served as lead for coordinating the 2018 C2C4C ride, said Heidi always encouraged those around her to continue pushing and fighting. “It was as if the energy she gave off to others was fueling her,” Tobin said.

Johanna Mercier, head of U.S. and Large Markets, Worldwide Commercial first met Heidi during the 2018 C2C4C ride and remembers how inspiring she was to the other riders, herself included. “If she could keep going, so could I,” Mercier said recalling the ride. “Any challenge I face is nothing compared to her fight. She will be missed.”

In her personal profile for the C2C4C ride, Heidi wrote that she was riding for two maternal aunts and her stepmom. As those who knew her would have expected, she put herself last, writing, “Additionally, I am also on my own personal journey living with a cancer diagnosis. I get up every day and face the uncertainty of tomorrow, but know that I have to keep going.”

Heidi, who was living in Atlanta, is survived by her parents, her step-brother and step-sister, extended family, dear friends and beloved dogs, Orie and Joon. Heidi’s passion for cancer patients was evident in her words and actions.

“What inspires me is the smiles that I see from patients when I walk into a doctor's office, the positive attitude that they carry, and the hope that gets them through each day,” she wrote. “I am riding so that patients can continue to smile, continue to have hope, and to have the best quality of life possible. My message to cancer: We are strong, we will fight and we will not let you define us.”