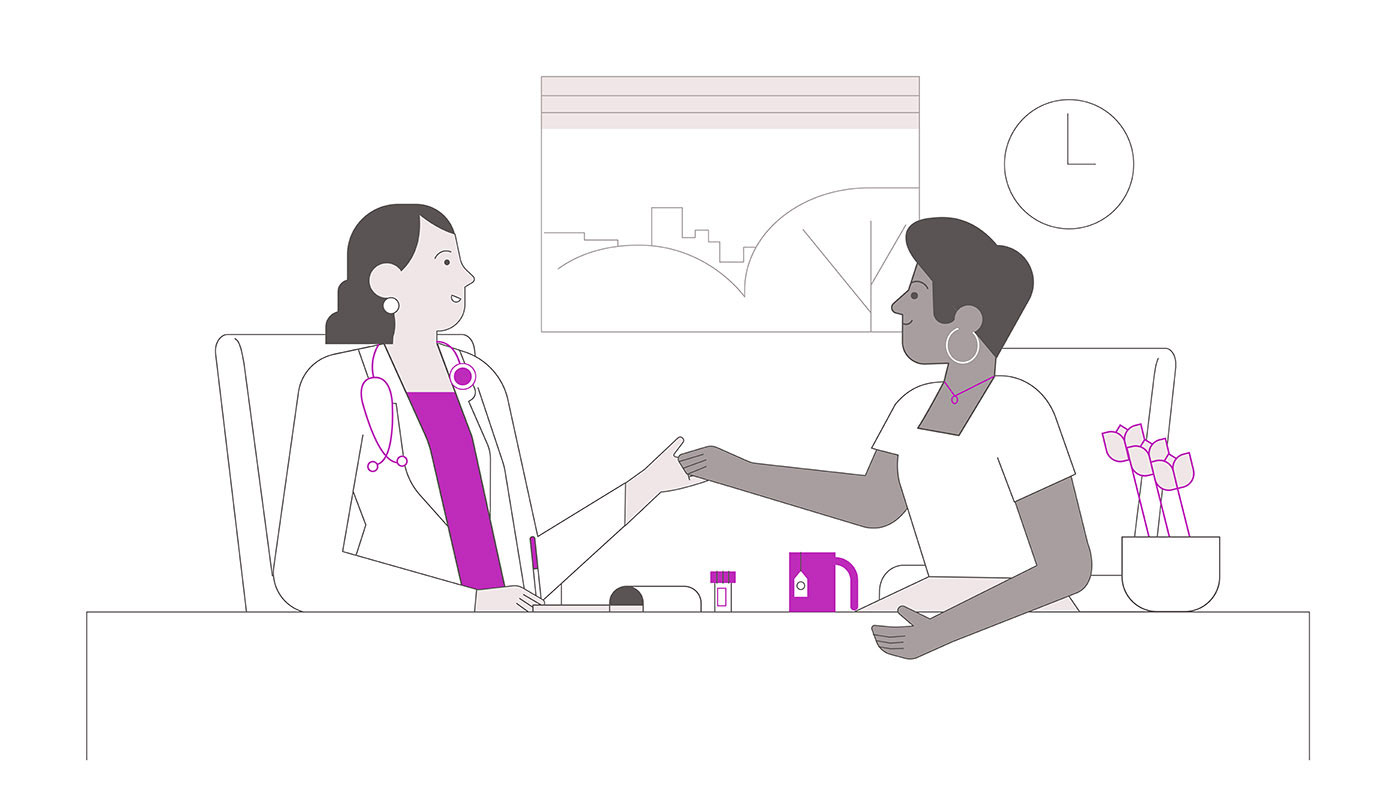 Patients have a single goal: The best care possible. But too often African American patients with multiple myeloma aren’t getting it

When Gail M. initially felt what she called a “twinge” in her back, she didn’t think much of it. It hurt a bit but was just another ache and pain, she thought.

Not long afterward, she felt a series of twinges that grew worse. Still, despite being a health educator at a medical school, like many people she tried to manage it on her own. Eventually her back hurt so much that she had trouble getting out of bed, and when she did, she had difficulty walking. That’s when she realized something was very wrong.

The year was 2008, and a visit to her primary care physician didn’t seem to raise much initial alarm, but he ordered an MRI, X-rays and a test called a protein electrophoresis just to be sure. Unfamiliar with the protein test, Gail went home and researched it online. “I just kept seeing multiple myeloma, blood cancer, something about the bones,” she says. Her physician suggested she see a hematologist.

Batteries of exhausting tests later, Gail was finally diagnosed with a disease she’d never even heard of: multiple myeloma, a rare type of blood cancer that develops in bone marrow and affects plasma cells.

“
Disparities in healthcare are nothing new, despite the increased attention they've received since the onset of the COVID-19 pandemic. But they don't have to be - and shouldn't be - a given. They can be narrowed or potentially eliminated when organizations with the knowledge, resources and determination step up to make a meaningful and sustainable difference.
”

A SEER-based, comparative analysis of more than 37,000 patients from 1992 to 2007 showed that white Americans with multiple myeloma have gained 1.3 years of life compared to only 0.8 years of life for African Americans. And evidence shows that longer survival rates are due to a variety of treatments, including stem cell transplants, novel therapies, the use of doublet and triplet combination regimens and, critically, enrollment in clinical trials. Yet African Americans have had less access to these treatments and in turn, derived fewer benefits.

Consider stem cell transplants. Though rates in the use of stem cell transplant – considered the standard of care for eligible patients – are rising in the U.S. for multiple myeloma patients, African Americans are 37% less likely to have one than white Americans. African Americans also are less likely to be treated with novel medicines and combinations of therapies, and make up just 8.6% of patients in multiple myeloma clinical trials.

COVID-19 has drawn fresh attention to several factors that can play a role in racial health care disparities, including systemic racism that can result in subpar care and lead to mistrust in the health care system. At times, the mistrust can even cause people to delay or completely avoid care when needed. But these racial health disparities don’t have to be a given. There is an opportunity to narrow these gaps when organizations with the needed knowledge, resources and determination step up to make a meaningful and sustainable difference.

“
Standing in the Gaap invites people in "to be a part of the team that's looking at the differences."
Gail M.
”

The program is producing a variety of educational materials, sharing information across social media where its Facebook page has over 61,000 followers, supporting speakers programs that have attracted more than 2,000 health care experts and establishing a regular presence at medical congresses. It’s also cultivating partnerships with health care providers, government, researchers and advocacy groups.

“At BMS we take a holistic view toward narrowing the gap in outcomes for African Americans with multiple myeloma because so many factors have contributed to it for so long,” he  says. “By empowering both patients and providers with the information they need to make the best decisions possible for themselves and their patients, we believe we can accelerate and expand progress for these patients.”

Gail says she couldn’t agree more. Though Gail had read about the increased prevalence of multiple myeloma in African Americans early in her diagnosis, she wasn’t aware of any research about why those differences exist. When she would attend scientific meetings or webinars for patient education, “there was radio silence” about that.  She says she has seen this change in recent years, and it’s why programs like Standing in the Gaap can make such a difference for patients.

“We are always looking for information on African Americans and myeloma,” Gail notes, adding that because she and many others have access to crucial information, such as the comprehensive educational brochure developed by Standing in the Gaap, they are able to distribute it at their patient support groups and elsewhere, including churches and health fairs.

More than a decade after her diagnosis, Gail believes African American patients have more insight into the disease and their treatment options than she had, thanks to information like this. “When you have a publication like this, you have somebody who has acknowledged that African Americans have multiple myeloma and they’re different and we’re looking at those differences.”

It’s “vital [because] it gets people more involved in the conversation about their health and their quality of life.”

More importantly, she adds, Standing in the Gaap invites people in “to be a part of the team that’s looking at the differences.”

Today, Gail is in remission for the second time, her first remission having lasted seven years. She’s hopeful that she’ll remain healthy and be able to continue to educate the African American community about multiple myeloma. She wants to help patients get the information, treatment and support needed to survive.

“Patients may be standing in the gap, but it’s up to the health care ecosystem to actually narrow it so there’s no gap at all.”