For Ryan Moslin, senior immunology researcher at Bristol Myers Squibb, all great discoveries start from the same place – an idea.

When Ryan Moslin joined Bristol Myers Squibb as an immunology researcher, he already was acutely aware that the road from bench to bedside is long and requires resilience. Still, he set out that day to work on an investigational inhibitor with the potential to treat autoimmune diseases, including a condition Moslin himself lives with.

Despite all of the twists and turns along the way, Moslin says all science has a similar genesis.

It Starts With an Idea 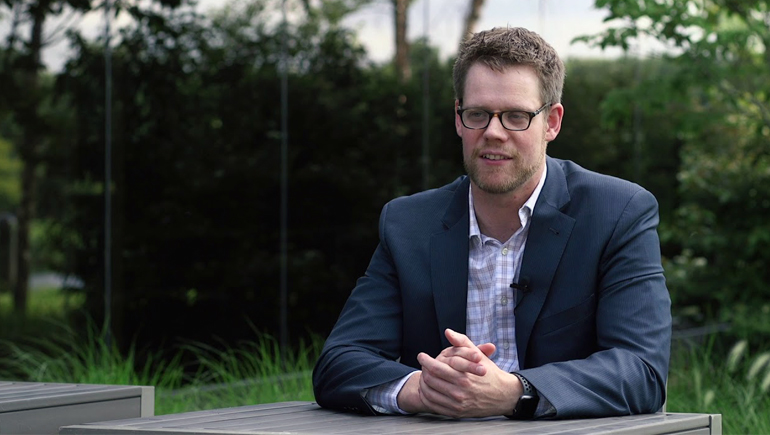 Hear from Ryan as he details the early drug discovery process, from a medicinal chemist’s point of view.

"Science always begins at the same place…it has to start with an idea,” says Moslin. “There are different approaches and different scientists, so the form that every idea takes is always very different. But it always starts with that one idea, one question."

Knowing this, Moslin finds value in working on a team that promotes diverse thought, noting it’s key to the early research and development process.

“When I was looking for a job, I knew that I loved medicinal chemistry but had a bit of a unique background,” says Moslin. “When I came to Bristol Myers Squibb, I was really struck by how the senior leaders within the chemistry department were not only open to people with different backgrounds, they actively sought to bring together people with diverse perspectives to collaborate and solve problems that, until that point, didn't have good solutions.”

From Idea to Reality

After theorizing an initial idea, chemists identify a target  (something in the body they’d like to modify), as well as a hit (something to modify it). Then, they develop a hypothesis, test the hits against targets and reassess or modify the design. This process can be lengthy and difficult, but eventually, a very small number of molecules are determined viable enough to move into clinical trials for further testing.

If you ask Moslin what word comes to his mind to describe a medicinal chemist – he’s quick to respond: resilient.

“Medicinal chemists face a lot of failure,” he says.

A chemist may touch a large number of programs during a career, maybe 15 to 20 in 25 years, he explains. Of those, a small handful will be programs where the chemist feels a real attachment or ownership. And of that small handful, a researcher may be lucky to see even one or two will actually advance into human trials.

“It's truly a once in a career achievement to advance something into the clinical space, and a once in a lifetime event to bring something to market,” says Moslin.

This resilience, in combination with scientific curiosity, are the hallmarks of medicinal chemistry, cultivating the ideas that spark the long path of drug discovery and allowing Bristol Myers Squibb to continue its mission to discover, develop and deliver therapies to patients in need.