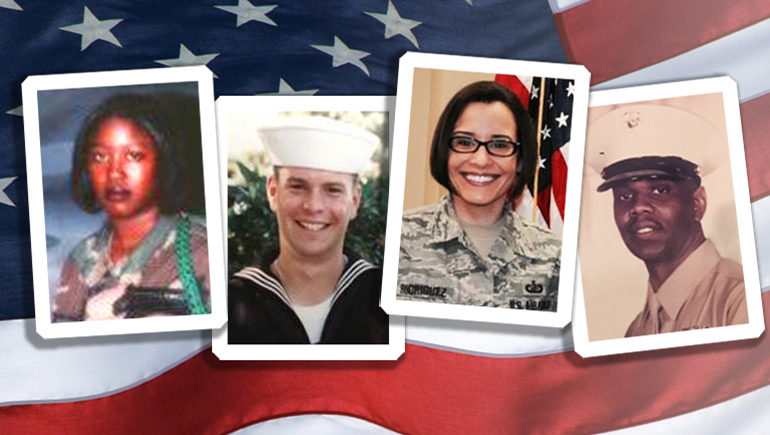 The Case for Hiring Veterans

It’s not uncommon to ask your co-workers about their career paths and learn that they may have worked previously in a similar role at another company or perhaps spent time in a different industry.

Ask Curtis McDonald, a senior manager of State Government Affairs who spends a lot of his time talking to policy makers, and he will tell you about what it is like to conduct g-force testing for pilots and analyze how much the human body can endure without sustaining injury. This was just one of many job responsibilities and experiences that McDonald had during his time in the U.S. Navy.

Despite how vastly different his job duties in the Navy and at Bristol Myers Squibb may seem, McDonald has found that there are many similar qualities needed for both service in the military and a career in the corporate world.

“Two of the primary qualities needed are attention to detail and showing up,” says McDonald. “We have an old saying: Five minutes early is ten minutes late. Show up and be accountable for your time.”

Remembering the discipline he received in military training, McDonald says that the level of responsibility, experience and commitment that veterans bring to the workplace is undeniable. That’s why, McDonald says, it’s crucial that hiring managers seek out veterans when recruiting talent.

Understanding that veterans bring exceptional value to the workplace, McDonald wanted to educate the rest of the company and build a support system for fellow employees who have served in the military. In 2012, he co-founded the Veterans Community Network (VCN) People and Business Resource Group at Bristol Myers Squibb, helping to raise awareness of veterans’ needs and the potential they bring as employees.

While veterans bring a multitude of valuable skills to the table, McDonald believes their sense of loyalty is one of the greatest assets they bring to a company.

“Military people are fiercely loyal and tend to stay at companies, especially if that company provides growth opportunities,” says McDonald. “This goes back to the mentality from training and having a steadfast allegiance to their military unit.”

Sharletta Everett, a data quality insurance administrator, comes from a long line of family members who have served in the military, including her dad and cousin who were in the U.S. Army. Growing up, conversations about the military and its different branches were common in her household.

“I was inspired to join because of my family,” says Everett, who works in Tampa. “I come from a military family that prioritizes giving back to the community.”

Everett joined the U.S. Air Force as an information manager. She provided technical support for the personnel office and was tasked with fixing a great deal of varied computer issues. Strategizing and troubleshooting quickly became her strongest qualities. These skills naturally carried over to her current role at Bristol Myers Squibb where she supports R&D capabilities within the Business Insights and Analytics department.

“In the military and in my current role, things don’t always go as planned,” Everett says. “I’ve learned the importance of being creative to accomplish a mission.”

When it came time to transition out of the military into the workplace, the military had arranged a transition assistance program that provided the tools to write a resume and dress for an interview. The goal was to teach Everett and her comrades how to market themselves for corporate America and show off their transferable skills.

“Veterans are attractive candidates to companies because of the leadership skills we possess,” Everett says. “We are trained to be leaders at a very early age.”

Giving back to veterans is a cause near and dear to Everett. She is extremely active in the VCN and is proud of the work that its members do -- not only for employees, but for military members and their families through programs such as Tampa Bay Crossroads.

“The volunteer work we do in the VCN is about giving back,” says Everett, “We are trying to get other veterans back on their feet so they can start moving their lives in a positive direction.”

There’s an acronym that Gerald Young, an IT lead in Tampa for the Field & Global Scientific Service Desk, learned in the military and it has stayed with him ever since: JJ-DID-TIE-BUCKLE. It stands for judgement, justice, dependability, integrity, decisiveness, tact, initiative, endurance, bearing, unselfishness, courage, knowledge, loyalty, enthusiasm.

“You need all of these attributes in the military and the corporate world,” Young says. “If you use these every day, you’ll go far.”

Prior to joining Bristol Myers Squibb, Young served in the U.S. Marine Corps for more than 20 years. By the end of his tour, Young was managing the entire aviation operation for an air station.

Young’s time in the military taught him that building a sense of camaraderie within the team is essential to accomplishing a mission or driving business results. But that only happens if you can establish open lines of communication, says Young, who manages a team of more than 20 colleagues.

“You have to be able to communicate effectively so that everyone understands each other and the mission,” Young says.  “When I show my team respect, I earn their respect in return.”

In the military, Young also learned the importance of diversity through working, training and living with people from diverse cultures and backgrounds. Young says this experience was invaluable when it came time for him to lead a team at Bristol Myers Squibb, allowing him to truly understand and embrace diversity and inclusion as key to driving the success of any mission.

“Being in the military was one of the best diversity trainings,” says Young. “In the U.S. Marine Corps everyone is green. There are no colors.”

When Silka Rodriguez started working at Bristol Myers Squibb, she had just left the military. Having grown accustomed to standing at attention and other aspects of working in the Air Force, Silka saw an immediate difference in the work culture.

In the U.S. Air Force, Rodriguez was a financial management specialist who trained airmen in operations at deployed locations, specifically within financial management. She brought her knowledge from the Air Force to the North America Capability Center (NACC) & Global Capability Strategic Operations. As the lead of Knowledge Management & Onboarding, Rodriguez entered a seemingly new world that required a different level of skill training.

“The transition from training airmen who were deployed across the world to training at Bristol Myers Squibb is of course different, but there are similarities as well,” Rodriguez says.

One major difference in her transition out of the military was no longer living under the rule of Don’t Ask, Don’t Tell – a law that, during her time in the Air Force, barred service members from being openly lesbian, gay, bisexual or transgender (LGBT). Leaving the military meant Rodriguez could come out and live proud.

During her first year of transition to the corporate sector, Bristol Myers Squibb provided Rodriguez with a mentor.

“My mentor was instrumental in guiding me when I didn’t know how to navigate the new environment,” Rodriguez says.

Additionally, Rodriguez had a manager who believed in her, Lee Evans, head of the NACC, who encouraged her to start a new chapter of the VCN there. She jumped at the chance.

“After starting the VCN at the NACC, my first event was creating a giant U.S. flag with the handprints from everyone in the office,” Rodriguez says, “It was a small way to remind our veterans and non-veteran staff that Bristol Myers Squibb stands by our community.”

RELATED CONTENT
Belgium employee, a trained nurse, volunteers during COVID-19
Special Delivery: Dublin Employee Volunteers…on a Motorcycle
Encouraging the Next Generation of Female Scientists
Timing is Everything: An Interview with Catherine Owen
Doing more for those who serve