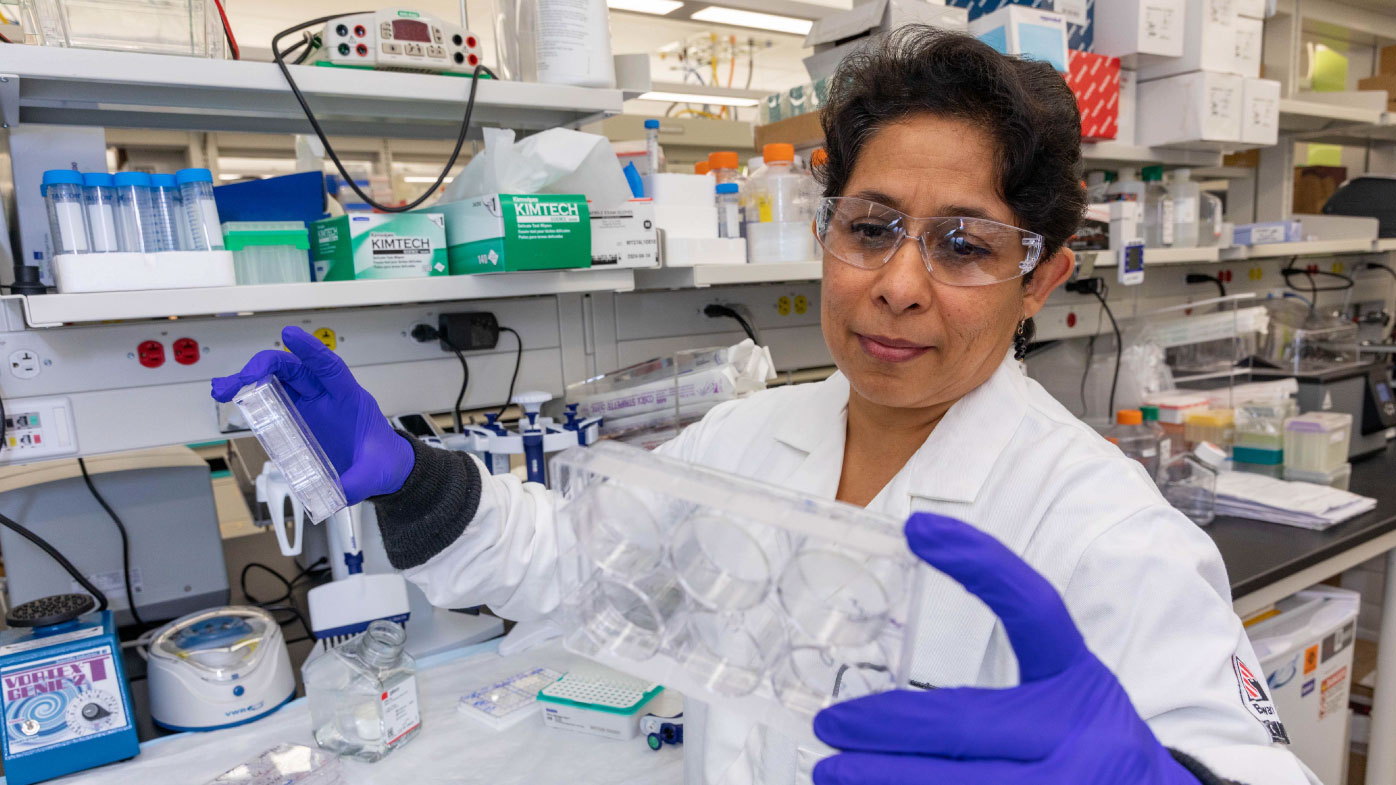 Cancer cells are not only stubborn; they are smart. They find ways to continue to grow and multiply by mutating to evade the immune system and anti-cancer therapies. The slyest cancer cells continue to mutate over time. Lata Jayaraman knows this all too well.

“The cells go into survival mode, they know they are dying and the stress of that desire to survive causes mutations,” Jayaraman explains. “Kind of like a teenager who doesn’t listen to his parents’ advice, mutations mean that the tumor cell doesn’t listen to cues that tell it to stop proliferating, and instead finds ways to resist the therapy and continue to divide. That is the process of development of resistance.”

In Cambridge’s Kendall Square, Jayaraman is head of Oncology Drug Discovery at Bristol Myers Squibb’s state-of-the-art Mechanisms of Cancer Resistance (MoCR) Thematic Research Center (TRC), where she and her team of researchers are working to change the game for people with cancer whose tumors do not respond to current therapies. They seek to discover and enable development of new treatment options targeting pathways that cancer cells often rely on in order to escape current standard-of-care treatments.

Jayaraman and her team specialize in discovering and optimizing drugs for novel targets that have the potential to overcome cancer resistance mechanisms. Through years of research and an interdisciplinary approach, they have learned some methods for combatting those sly cancer cells. She says the trick is to attack these cells with multiple weapons (i.e. drug combinations) at the same time.

In some cases, mutations can be silent (a change in a DNA sequence that does not change the basic building blocks of a gene) or be acquired over time, which explains why some patients may respond well to certain therapeutics for several years before the cancer develops resistance mechanisms. And then just like that, a therapy that once worked can become ineffective.

In the lab, Jayaraman and her colleagues are trying to figure out how to make it impossible for a tumor cell to survive, utilizing a concept called synthetic lethality. Synthetic lethality occurs when mutations in two genes together result in cell death, but a mutation in just one of the genes would not. “Using next generation therapies, you attack the vulnerability of the cancer cell,” she said. “Through clever experiments in the lab and collaborating with colleagues in the other TRCs and functional areas, we hope to identify combinations of drugs that will knock the tumor cell out.”

“
In oncology, you cannot divvy up the work into separate categories—it’s all interwoven
”

While Jayaraman and her team at MoCR focus on tumor intrinsic targets (i.e. factors inside tumor cells that contribute to therapy resistance), they partner with colleagues in other TRCs across the U.S. to examine the biology of cancer cells from a holistic perspective. The team from the Tumor Microenvironment (TME) TRC in Redwood City focuses on tumor extrinsic targets, or targets around the tumor cell, such as interactions with immune cells and other cells within the TME. Meanwhile, the Immuno-Oncology and Cell Therapy (IOCT) TRC in Seattle considers how cell therapies can leverage a patient’s own immune system cells to attack the cancer cells. And finally, the Oncogenesis TRC team in San Diego are leaders in protein degradation. They work with small molecules that use the body’s natural recycling system to degrade proteins that drive tumor cell growth, rather than try to inhibit them.

“The teamwork across all four TRCs is crucial in attacking cancer cells from every angle possible,” says Jayaraman. “We constantly ask ourselves: Can we do this any better or from a more creative standpoint? How can we keep building from here based on what we already know?”

The teams also work with colleagues in chemistry, toxicology, pharmacology, and translational medicine, among others, to engage in a holistic understanding of cancer cells, an approach that positions BMS to continue to be a leader in the oncology space.

“In oncology, you cannot divvy up the work into separate categories—it’s all interwoven,” Jayaraman says. “At BMS, we always put our patients at the forefront of what we do. So, we need to collaborate across disciplines and follow the science where it takes us, so that we can continue providing the best care possible for our patients.”

RELATED ARTICLES
C2C4C: Back on the road and bigger than ever >
Today’s cell therapy insights shaping tomorrow >
The evolution of lung cancer research >
The quest to stop cancer from coming back  >
Learn more about Lata Jayaraman and her work at Bristol Myers Squibb >